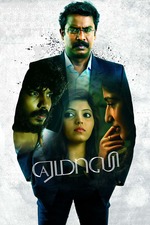 As the title says, the watcher becomes an yemali.

If you took everything from him, betrayed him, trapped him, and broke both his hearts… how far might the Doctor go? Returning to Gallifrey, the Doctor faces the Time Lords in a struggle that will take him to the end of time itself. Who is the Hybrid? And what is the Doctor’s confession?

Trapped in a world unlike any other he has seen, the Doctor faces the greatest challenge of his many lives. One final test. And he must face it alone…

The Doctor and Clara are called back to earth when Rigsy discovers a strange tattoo on the back of his neck that appears to be counting down to zero. Their investigation leads them to a hidden street in the middle of London, the discovery that Rigsy has been issued a death sentence, and one of them facing the choice of having to make the ultimate sacrifice; to face the Raven!

Vision recovered from the wreckage of Le Verrier Space Station shows how the Doctor and Clara became entangled in a rescue mission. As the footage plays out, a horrifying secret is uncovered.

One of the most visually stunning movies I’ve seen these couple of years and that ominous background score by Zimmer and Wallfisch is truly masterful.

K: Half as much but twice as elegant, sweetheart.

A young blade runner’s discovery of a long-buried secret leads him to track down former blade runner Rick Deckard, who’s been missing for thirty years.

A whole roster of stars star in this adaptation. I wish we had more of Branagh’s Poirot movies.

A good adaption of the Elseworlds story.

Very disappointed with the pace of the movie. Looks like an attempt to piggyback Anushka’s earlier historical movies… Most scenes seem to be an attempt to remake some of Chandramukhi’s scenes as a horror scene.

Seriously, this movie could’ve been a bit serious considering the title.